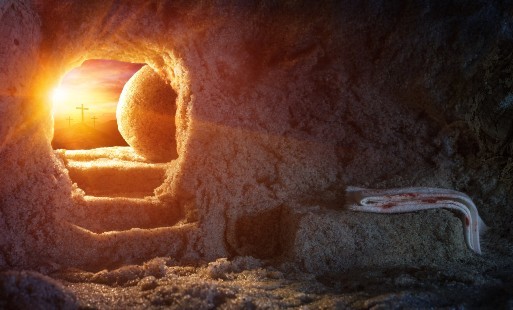 Amidst the darkness of the world, Jesus Christ has shown us the way – the way of suffering and of glory; the power of light over darkness and resurrection over death. In Christ, we find peace and hope and in our weakness, despair and loss of hope, we yearn for and behold his power of resurrection that despite the emotional battering the people receive daily, the hope of resurrection supersedes for “in Christ shall all be made alive.”

Christ has taught us that there is no resurrection without death. There is no glory without suffering and there is no prosperity without hard work. “Unless a kernel of wheat falls to the ground and dies, it remains only a single seed. But if it dies, it produces many seeds.”(Jn. 12: 24)

Some preachers of today, rather focus more on prosperity without the suffering, yet, suffering is not something to be eulogised. If it were up to Jesus, he would choose for the cup of suffering to be taken away. He did pray so, but suffering is a necessity for glory to be more endearing. Unless a person puts on his thinking cap, his intellect, engages his talents, and works hard, there will be neither progress nor prosperity. That Nigeria is where it is today comes from the concentration in prosperity without the necessary work.

Leaders of various groups in Nigeria do not think about the work. They concentrate on personal gain and interest. The people also think more of momentary gratification. This results in the battering of the people daily with the ailing economy, unworking policies, insecurity, corruption and poverty and yet, the people are used to fulfilling the aims, ambitions and interests of these few leaders who often turn the people to what they want them to be.

The leaders, threatened by the presence of Jesus and his teachings, decided to take out Jesus. They accused him of blasphemy. The people, who shouted gloria and hosanna as Jesus made a triumphant entry into Jerusalem, were used against Jesus. They shouted “crucify him”, “crucify him” on the influence of a few leaders even when they could not say what Jesus committed to earn him crucifixion. The same people chose Barabbas – a thief over Jesus who came with a message of hope.

What would make the people choose Barabbas in place of Jesus?

The Nigerian people have been faced with choices over the years – choice between those known that can bring about change and those who cannot. Such a choice has been presented constantly. In the 2015 elections, the crowd said, away with the “meek” man and they chose a bigot. Nigerians have carried their cross of suffering of death and poverty as the outcome of that election. Is there hope of light after the darkness?

Always think for yourself

The 2023 elections are around the corner, presenting different choices to make. It is left for the people to choose wisely or be influenced by those few leaders who, out of their selfishness, stir the crowd in favour of their chosen candidates who they can control.

The same few leaders made the people accept the constitution – the document that has left them prostrate. A document they have no hand in the preparation and yet must abide by.

Nigeria is a country blessed with so much resources of human and material, yet, it is labelled the headquarters of poverty. Can the people make their choice without being influenced by the few leaders? The manner of their continued choice will prevent more suffering or bring hope.

Hope is a necessary virtue that carries people over the path of suffering. Hope of resurrection gave Jesus the strength to fulfil the will of his father. Hope keeps Nigerians alive waiting for a time the country will work and for the people to have the power to decide their fate.

It is time that the people return to God, seek his face and shun the powers of darkness. As Nigeria is resting on a thin line of collapse, a wrong choice will send the people into destitution.

As Jesus has shown us that for one to be a good leader, he must be ready to serve. In service of the people, the leader must show compassion, humility, and courage to stand up for the people.

As we celebrate the resurrection of Jesus and him as the light of the world, may the people embrace that light and make a good choice not influenced by the selfish leaders that are out to serve themselves first.