Rice pyramids in the midst of hunger

Home » Rice pyramids in the midst of hunger 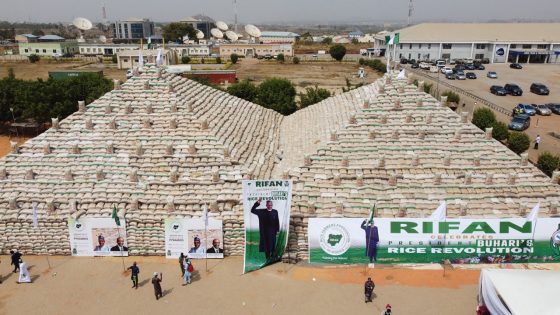 Last week, in the nation’s capital, Abuja, President Buhari unveiled over a million-bag paddy rice pyramids harvested by farmers who used the rice to pay back loans they took under the Anchor Borrowers’ Programme, to expand their production.

Each of the 13 pyramids had about 115,000 bags, of 100kg each of rice which were used to show Nigerians that sufficiency in rice production is possible. The president and his administration have used those pyramids to also show the world that Nigeria can now produce her food, especially rice which is a staple food for Nigerians.

The tradition of crop pyramids started in the early 20th century, with Alhassan Dantata, a trader, who supplied groundnuts to the Royal Niger Company. With a boom in the business, Alhassan amassed plenty of bags of groundnut. Pyramids were made with these bags, skillfully placed to form the replica of the Egyptian pyramids. They were at the time serving as tourist attractions as well as a kind of warehouse.

Groundnut; the farming of it and the pyramids, soon became the pride of the north which Nigerians are always nostalgic about. To bring back the glory and pride of the north, groundnut pyramids have been reborn in the form of rice pyramids.

Either he pursues the reenactment of grazing route which in his interviews, he has not failed to mention or he pursues other projects where he is mostly focusing on the North.

The sight of the pyramids could also be a form of motivation to the farmers as the glory of the groundnut pyramids gave way when crude oil was discovered. People are being cajoled to go back to farming to ensure food sustainability as the world is looking towards renewable energy.

While unveiling the pyramids, the president was hopeful that the price of rice would go down following the millions of rice bags stacked on the pyramids.

“I am aware that the bags of paddy will be moving straight from here to rice milling plants across Nigeria, which will lead to the release of processed rice to the markets by the rice millers. The measure will aid our efforts at reducing the price of rice in Nigeria,” the president stated as he unveiled the pyramids.

The president’s hope for a reduction in price of rice may be cosmetic as one week after, even though those bags of rice had been on the pyramid for a while now without being taken to the millers, how then will the president think that millions of bags of rice which are exposed to sun for a long time will be processed to reduce the price of rice within the shortest time?

Read Also: Insecurity and the impending food crisis in Nigeria

The cost of constructing the pyramids and transporting those bags of rice including the process of showcasing those 13 pyramids of rice just to bring back to life the pyramids, could actually crash rice prices from the present N24,000 to N8,000 per 50kg bag where it was before the emergence of the administration.

Importation of rice had been banned in Nigeria by the Buhari administration to encourage farmers to embrace rice farming and was supported by the CBN’s Anchor Borrowers’ Programme which has so far supported over 4.8 million smallholder farmers.

While the ban on rice importation lasted, the price of rice rose astronomically. With the number of the smallholder farmers, rice production should increase and the cost of rice should decrease. If Nigeria could produce such tons of rice as showcased, what has been happening these years or is the president trying to tell Nigerians that rice production starts and stops for the pyramids?

Some stakeholders have criticised the administration claiming that part of the rice used to build the pyramid was imported. The Peoples Democratic Party in a statement, called it ‘pyramids of lies.’ “There is nothing to celebrate in the APC pyramid of lies in Abuja. It is rather shameful that APC leaders are again ridiculing President Muhammadu Buhari by making him unveil pyramids of allegedly imported foreign rice which are re-bagged as locally produced, just to create an impression of a boost in local production under his watch.”

While clutching on the last straw, the president is making frantic efforts to create a legacy at least to his satisfaction as he would be happy to see the pyramid reintroduced. This effort is also about the 2023 elections as the APC government has failed the people. Creating rice pyramids for show is an achievement for the administration and his party, while hunger persists. And I ask; where is the rice?