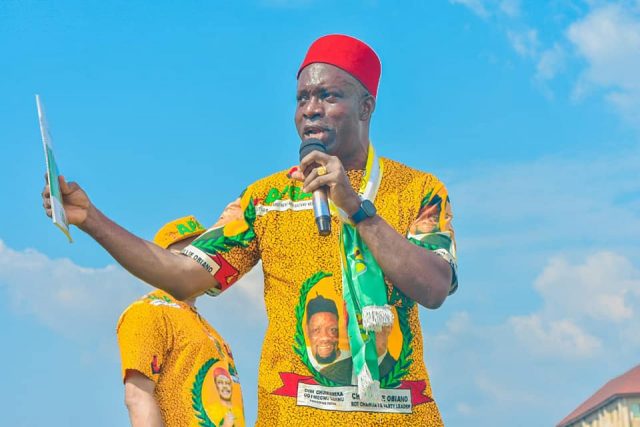 The campaign and electioneering period has ended and the congratulations rained down, it is now time to pursue the development of the state as aggressively as outlined in the Prof. Chukwuma Soludo’s contract with Ndi Anambra state; The Soludo Solution.

Since the election ended, the Governor-elect Prof. Soludo has been making pronouncements which signal the worldview that will guide his term in office.  His recognition of the local content to boost the local economy and the journey to Okpoko immediately after the swearing-in, marks a man hungry to roll-up his sleeves to work for the restoration of the dignity of Igbo people.

The choosing of an 88-man transition committee is a pointer to the calibre of those Soludo would like to work with. The move could be translated as a way of integrating the region starting with Anambra, but a different school of thought believes the governor-elect deliberately wants to let Anambra open of the many government secrets of the state to the various people across the region in the committee even as the number of the committee members is humongous.

Members of the transition committee have stated that they offer their service as a contribution to the renaissance of the Igbo land. Subsequently, they have redefined the way of appointments into the services of the state by mass application and instituting talent data banks. If strictly followed on merit, it will offer a base to get great talents to work with and to have them on ground as the new administration resumes.

The election of Soludo reinstated hope among the Igbo people and confidence among Ndi Anambra and to restore and cultivate this hope and confidence in the people, Soludo has been given a heavy load to carry which may be heavier than whatever he imagined. He has the faces of millions of Igbo people hungry for Igbo renaissance to remind him that his election is consequential. How he manages this load is dependent on his strength of character, forthrightness, accountability, transparency and managerial skills.  The blazing flame placed on the hand of a wise child will not dim. Soludo will not let the people down.

The new government whose inauguration is a few days away will behold a state engulfed with insecurity. A victim’s account shared on social media stated that as he was kidnapped by the unknown gunmen, he was asked if he was Soludo’s brother as they came from the same town. Could the insecurity partly be a foundation for destabilization of the new government? If that is possible, who is orchestrating the wanton gunning down of people; old and young, in the state?

Insecurity is stealing away the people’s confidence in the protection of life and property by the government and would signpost the Soludo administration. It could make or mar the administration from the outset. It calls for total reassessment of the security situation; formulation of a new strategy and architecture that will root out the new home grown terror or otherwise “mercenaries” bent on inflicting terror on the people.

Sit-at-home and its enforcement has yielded the streets of Anambra state to the gun-bearing non-state actors, who are taking lives at their whims as youths having been introduced to hard drugs see these activities as a way to showcase their bravery. The energy of the youths has to be redirected to a development-driven quest than the cult-driven deaths that occur on the streets.

The swift handling and the rooting out of Insecurity from the state will energise the new government to focus on the developmental plans and visions and reinstate the investor confidence and economic activities in the state.

Anambra roads are due for aggressive expansion especially, the major roads. It is important to pursue in earnest the expansion of the roads as the roads can no longer serve the needs of the growing population in the state as the traffic becomes worsened during the festive seasons. There is no industrialization without adequate and spacious roads that will serve the big vision.

While pursuing the lofty visions in his contract with Ndi Anambra, Soludo should be mindful of the politics of bigmanism and blackmails. To avoid a state bogged down with shenanigans, Soludo is advised to call for a meeting of all the stakeholders where they should be made to find pleasure in helping in the development of the state, rather than play politics of intimidation on the governor.

While pursuing the re-engineering of the state, the political party of which Soludo is the sole governor should be expanded. If APGA should gain a stronghold on the South-east, where its ideals are for the development of the states as exemplified in the steady progress and stability Anambra has witnessed under it, the South-east would have secured a steady socio-economic progress and a political party to bargain with.

Prof. Chukwuma Soludo, your failure will cost the Igbo people a lot and your great performance will be a reassurance.  You will be laying a new foundation that will launch Igbo people into an industrial-technology driven region on which the economy of Igbo people will stand. Many people are hoping and praying that you succeed and many people are hoping that you will surely make Anambra the African Dubai-Taiwan. You now have the opportunity to explore all your ideas and visions.

You will create history and make history and will remain in the minds of Igbo people far into the future if you work hard for the betterment of the people. Remember, small achievements will not be accepted from you.

You now have power and mandate of the Igbo people in general and they will not forgive you, should you let them down.

People recount your arrogance as your weakness, but age and experience must have beaten that down. Be a listening governor and a people’s governor and not that elite who thinks that a bricklayer has nothing to offer. Run an inclusive government and think Anambra and Igbo land first.

Your big name is an expectation for big achievements. Go and achieve for the people and ‘take our homeland to the moon.’